Bacon Fat is a three-piece rock ‘n roll band, rooted deeply in the blues and drenched in a hard-rock/funk-soul-reggae/psychedelic fusion sauce. These guys make sure the sixties and seventies musical heritage will live on. Whether you bang your head on hard-rock, trip away on psychedelic jazz or melt down for smooth howling bluesy guitars and funky beats, it is all there.

The band name comes from an obscure hit of Andre Williams in 1957 called Bacon Fat. It fits the band in many ways, one could say.

As with most great performers, the best chance for you to feel the vibes from this unique band is to watch Bacon Fat perform live on stage.

Having said that, you know what to do!

At the end of the nineties, W. Johnson lost his interest in playing covers and left The Bluesfactory.  He decided to go his own way and started writing his own songs.  Two years and a first failed line-up later he teamed up with drummer Luke Lammenzo and bass-player Mr. Nasty.

Six months later, after an intensive period of songwriting and rehearsing a first demo-CD was recorded. Bacon Fat was ready to go on stage now with mainly new and original songs.

On March 9th, 2001 W. Johnson made his debut-appearance as the leadsinger and frontman of Bacon Fat. From that moment on Bacon Fat succeeds in playing show after show, and becomes a well known name in the blues- and rockscene in the lowlands.

Meanwhile W. gets in touch with Le Duc De Berloz and Le Grand Rititificateur.  They would take care of all the design and web-building for the band from here on.  The first result of this cooperation was the notorious cover of the second demo Plain Sustain in Januari 2002.  With the accompanying tour, Bacon Fat played their first shows in Holland.

In November 2002 they hit the studio again to record their third demo called Show Some Steel.  Here the first stoner and fusion elements showed up, expanding the sound of the band.

After playing 75 shows in less than three years, the band-members found themselves ready to release their first official CD.  To keep everything under control from a business point of view, W. Johnson founded Grease It Up Music cvoa.

The CD Boogielicious Baby (released December 2004) happened to be the ultimate compilation of the first years of Bacon Fat completed with 5 new tracks.  It is worth mentioning that at the time W. consciously decided not to use any of the tracks from the third demo with the intention of reserving them for the eventual second album.

2005 naturally became the year of the Boogielicious Tour and Bacon Fat played concerts and festivals all over the Benelux.  But between W. Johnson on one hand and Luke and Nasty on the other, a different point of view on the future of the band was rapidly growing.  So with spring 2006 in the air, Luke and Nasty left the band and started their own project.

Meanwhile, W. found new strength in the likes of Benjamin Cestillo (bass and backings) and Enrique “Rico” Gee (drums).  By the end of the year this line-up started the recordings for the second album.  June 2007 marks the release of  Reinventing The Mojo.  As planned 2 tracks from the Show Some Steel demo appeared here together with 4 other tracks from a fourth demo (2005) which was never released.  Received with great reviews worldwide, Reiventing the Mojo holds the spotlight on the band during a period of musical exploration.

2008 marks the year of the MOJO Tour.  These performances brought us the very first new original material (Liberty Bell and She’s Cocaine) which later would appear on the next release.  Bacon Fat also did it’s first shows in Germany.  The band celebrated it’s first decade with the Greasy Decade Tour 2010 performing most of the new material as preparation for the upcoming recording sessions for their third ambitious album: The Art Of Freedom.

In February 2011 Bacon Fat plays the first show of the Play With Feel Tour.  In March they launch the track One on one as a free MP3-single, announcing the upcoming release of The Art Of Freedom later in April. The album got blessed by great reviews in leading magazines such as RifRaf and MindView.  Ironically this did not result in better exposure for the band.  Although Bacon Fat played outrageous shows for drooling audiences, nevertheless the amount of gigs went down.  On top of that Benjamin seemed to have lost his focus on rock ‘n roll music resulting in his departure of the band in 2012.

Instead of looking for a new bass-player, W. brings in Neelzz, a former guitar-student he felt would fit in superbly with the band.  He only needed to learn to play the bass.  After 8 months of intensive rehearsing with W. and Rico he managed to create his own style on the bass-guitar, learn 32 songs including backing vocals and choreography and prove his value for the band in general with his overall attitude.

The Digging for Root Tour (2014-2015) was a success clocking in at 37 gigs including the first gigs in France.  In between the boys recorded the fourth full album Band Of Brothers, which was released in early 2016.  Recorded at Noise Factory studio in Namur, this was the first completely digital recording of the band.  Ironically it was also the first time that Bacon Fat released an album on vinyl.  And if that wasn’t enough the boys produced their first ever video clip under guidance of Pascal Baillien, who also does the videos for Channel Zero, Dimitri Vegas & Like Mike, Buscemi a.o.

The band then promoted the new album throughout 2016 with the successful Heartbreaker Tour which spawned 31 dates.  Then in November 2016 Rico came with some very sad news indeed: he decided to leave Bacon Fat after eleven years of duty.  A replacement was found in Tommy McDuff.   In the following weeks Bacon Fat rehearsed with 2 drummers to make the transition as smooth as possible. The idea was that Rico would play the remaining 2016 shows, with Tommy stepping in for the first show of 2017.  Because of an accident by Rico, Tommy eventually ends up playing the last two 2016 shows.

The Band Of Brothers tour started in January 2017 and by the end of 2018 the band had played 45 shows, wrote and recorded a new album and teamed up again with director Pascal Baillien for another video. Heart Rock & Soul Fire is released in December. With their fifth studio album and the accompanying video for ‘Burning Desire’ in the pocket Bacon Fat is ready to launch itself again onto the stage in 2019.

Despite the successful start of the shows the band again met some unexpected obstacles.  By Summer 2019 Tommy wanted to quit the job thus a new drummer was required.  Several auditions didn’t brought a solution and finally W. managed to recruit ‘Uncle’ Rik Volkaerts for the job.  With such an extensive background he was the perfect match.  The trio played 3 full shows in early 2020 when the world got hit with COVID-19.  Due to the problems following the virus and on top of that a bunch of professional and personal reasons Neelzz sees no other way than to quit the band as an active member.

Thus suddenly a new bass-player is required which’ll shake the line-up of the band completely again.  And as with all fairy tales luck appears when you most need it.  Enter ‘Uncle’ Frank Verdier who is brought in by Rik.  Both ‘Uncles’ have a long mutual musical history and with Bacon Fat they will get that once more to the next level.

So after all the band seems to be more than prepared to start its third decade with a refreshed line-up. 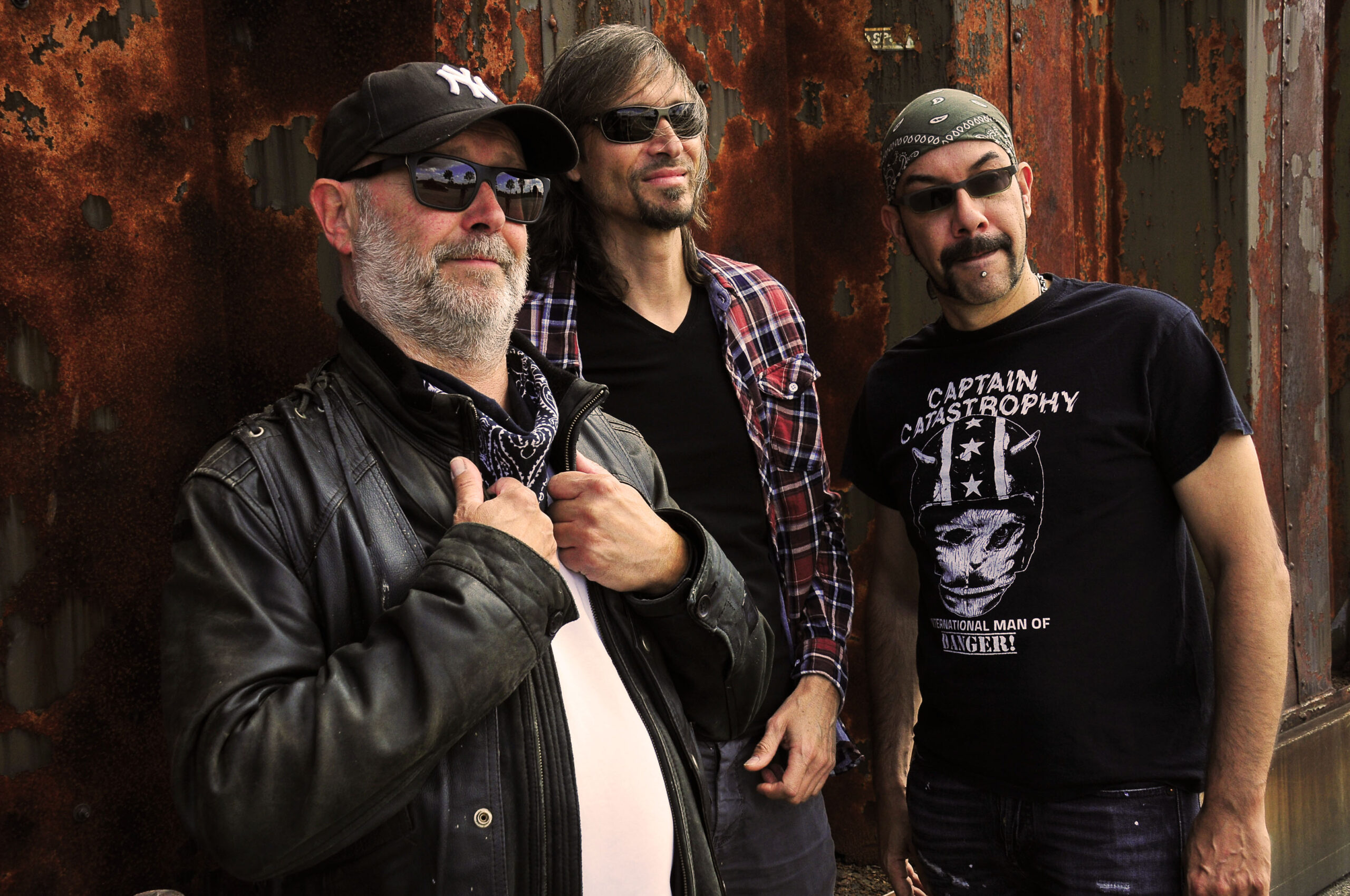